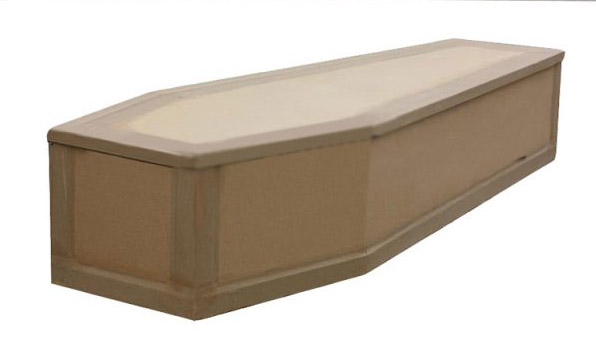 Cardboard Coffins – are they misunderstood?

Lifestyle Coffins was born in 2010, back then we were personalising cardboard coffins imported from a chinese manufacturer. We changed to MDF coffins in 2013 as we found we could source Australian made MDF coffins locally for the same price, and the quality was far superior. Back then we were not aware of the issues with cremation of cardboard coffins and the ashes, all we were concerned about was the quality of the coffin and price. Since then we have a lot better understanding of the funeral industry in general and cardboard coffins.

We get a lot of enquiries from those looking for information about cardboard coffins. In response, I have posted my research to our website. My research is based on communications with funeral directors, funeral industry associations and crematoriums.

Cardboard coffins are considered to be environmentally friendly for burial only. It is not however the case for cremation. Part of the cremation process is that the cardboard coffins need a large amount of fuel for a successful cremation. The traditional timber coffin forms part of the fuel for the cremation making them a lot easier to cremate. A cardboard coffin is burned up instantly leaving the crematorium technician having to compensate for this by further controlling the process. From an environmental perspective this is not necessarily a good thing. This contradicts the environmentally friendly tag that cardboard coffins are known for.  A cardboard coffin will burn away within seconds and as false economy the equipment will require more fuel to maintain the optimum operating temperature. When cremating cardboard, the fly ash can potentially remain as ash and it will not be entirely burned and large amounts of paper ash residue may remain at the processing stage. Worse still the fly ash can potentially block air paths in the after chamber reducing performance of the equipment. The quick ignition also creates danger for the operator as the cardboard is often on fire before the coffin is inserted into the cremator.

Cardboard Coffins do produce a lot more ash than traditional wooden coffins through the cremation process. Why does this matter? Usually the ashes are collected after cremation and stored in a creamation container which is presented to the family. After a cardboard coffin cremation, more often than not the use of two cremation containers is required to fit all the ash. This can be quite confronting for families and can also impact on their decisions about the ashes and memorials. I believe it is important that families are informed that if they are choosing a cardboard coffin there will most likely be two containers of ashes. Collecting the ashes of a loved one is an extremely emotional experience for families and any surprise about receiving two containers instead of one is something we’d all like to avoid.

From my research, I conclude that Cardboard Coffins are not necessarily as ‘eco friendly’ or ‘cost effective’ as they may seem. I think they still have a place in the funeral industry as long as families are informed when making their choice. As the manufacturing process is improved and refined I am sure some of the issues with cardboard coffins will be ironed out.

I hope this post provides a better understanding of the cardboard coffin.